As you know, VR – Virtual Reality is one of the newest and best system on the platform which has been developed since 2016. VR is increasingly known to the community. And 2017 is a boom year of AR, with the support of Google Tango in using ARkit on iOS 11+   In addition, a new technology called Mixed Reality (MR) which combines the thrill of virtual reality mixed with augmented reality in gaming, travel & streaming. MR is attracted by many concerns from the community as well and considered as a desirable technique for further development. 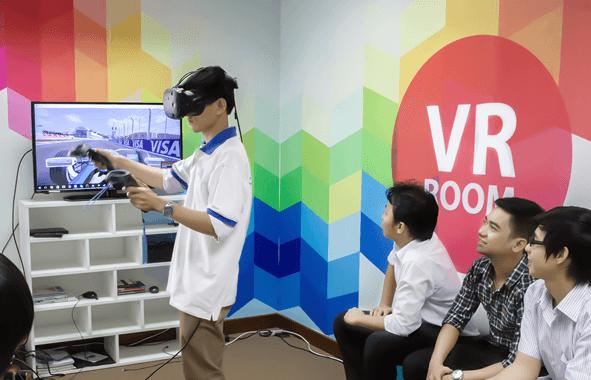 OneTech Asia is one of the unique companies in Vietnam that started developing AR/VR/MR very early in since 2016. With more than 4 years of experience doing AR/VR/MR projects for customers in Japan, France, China. With the goal of becoming the leading company in AR/VR/MR field, we have a highly qualified technical team, updating the latest technology as well as working on the latest devices such as Hololens2, Hololens1, Vive Focus, Oculus Quest, Nreal, …   With strong technical teams who have participated in a variety of projects, ONETECH ASIA is always ready to provide advice and technical solutions that meet your requirements and desires.   If you have any ideas or concerns, do not hesitate to contact us.

Virtual Reality is often used in Simulation and Entertainment

Hololens is used for introducing education-oriented content, included manipulating or collecting information in construction sites where machines need to be maintained … Such AR displays positioning on the windshield of Cars are also practically used in many businesses

VR (Virtual Reality) is the term used to describe the virtual reality platforms. 2016 is considered as the beginning of VR, some of the devices supporting VR technology such as the Oculus Rift, the HTC Vive or PlayStation is very noticeable. Besides, the Head-mounted display device like Goggles is also quite popular in VR field. This is a technique that creates an artificial environment on your computer to experience the feeling as if you are right there. Thanks to this technology, the quality of experience that people receive will significantly improve. Moreover, it can be used in many areas such as entertainment, real estate, health, disaster relief …

AR stands for Augmented Reality cluster – augmented reality is a technique used to amplify the real world by doubling visual information into the real world. While VR led to a world of simulations completely separate from the real world, AR only expanded into the real world. AR technology has been around for a few years but only until 2016 was it widely known thanks to Pokemon Go. In 2017, ONETECH ASIA company also contributed to the development of game applications related to location information and AR. While other types such as Microsoft’s HoloLens are quite popular, the AR market with AR Smart contact lens or AR linked cars in the future will probably even outpace the VR market.

MR – full name is Mixed Reality. Mixed Virtual Reality is a combination of VR and AR technologies. In the world of MR, the things of the real world and the virtual world will influence each other’s interaction. Following this trend, MR will be applied in many areas such as entertainment, health, education, and trade, gradually developing into a large market comparable to PC. In the companion, AR overcame virtual reality to develop into MR thanks to the combination of the two industries. In short, this is the kind of technology that holds the information of the real world in a virtual world, creating a world that blends both reality and fantasy.

xR is a generic term used for applications such as Augmented Reality (AR), Mixed Reality (MR), Virtual Reality (VR) … It refers to IT technology interwoven between reality and virtual reality (Game space, video CG.) via computers, headphones, etc. Techniques like SR and AVR can also do this, and xR is a common way to call such techniques.